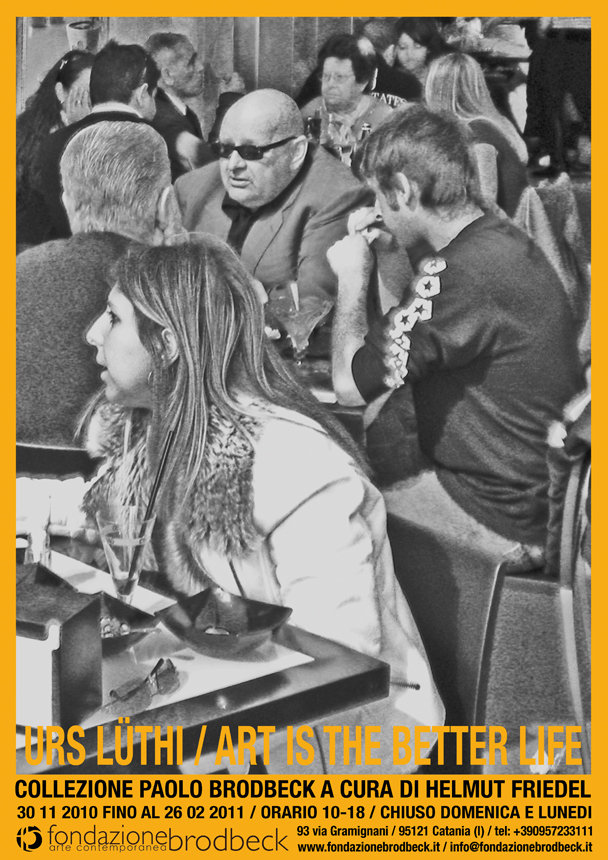 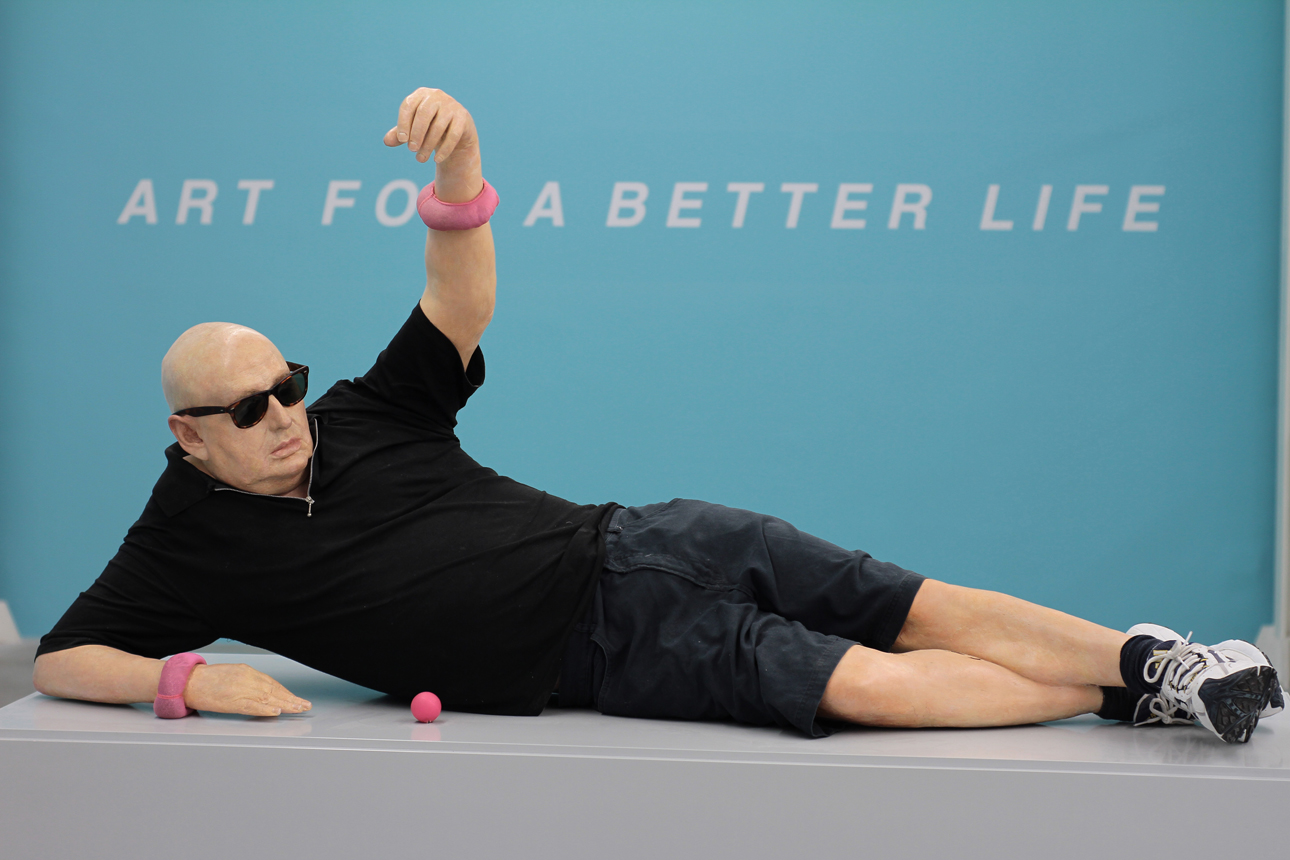 The exhibition of Urs Lüthi at the Fondazione Brodbeck focuses on various aspects of his sculptural work. It seems to be full of contrasts with regard to its material appearance, but it gives rise to a convincing unity through the inner sound of its message. From a historical perspective, the point of departure is established by the artist’s sculpture Low Action Games II from the series of works labeled Placebos and Surrogates (2001). Urs Lüthi first exhibited this sculpture in 2001 at the Swiss Pavilion during the Venice Biennial. This self portrait, based on two photographs with the same title Low Action Games from 1998, shows Urs Lüthi lying on the beach. In the first photograph, he is holding a small green rubber ball in his raised hand; in the second, the rubber ball has fallen to the ground. As a realistic depiction of the artist clothed in black sportswear and caught in a precarious pose, this sculpture presents an image of transience: The short fall of the ball, the insignificance of the movement and gesture, as well as the aging of the body, represented in the traditional pose of an image of Venus, embody a deep melancholy and do not lack a comic note as well. 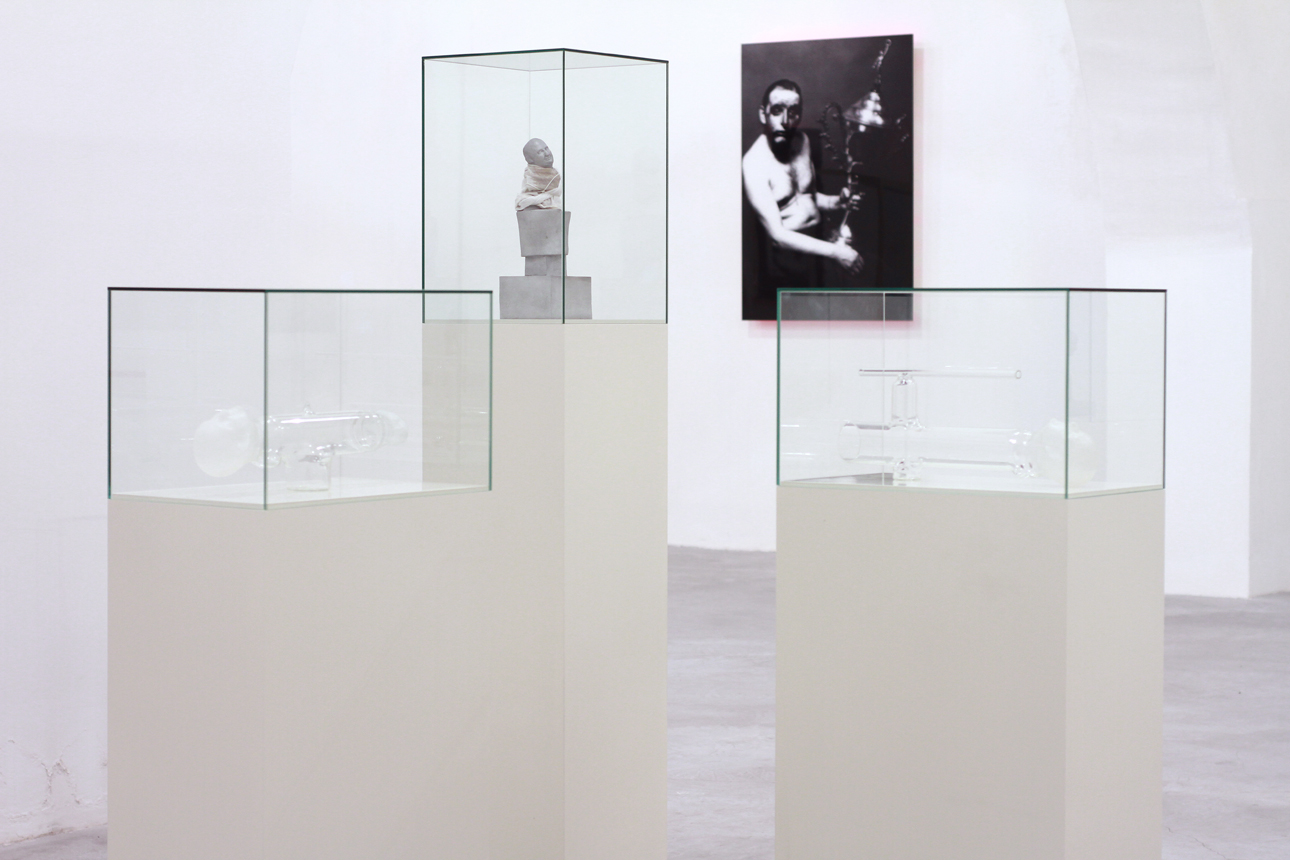 Thus already in 1970, one finds Urs Lüthi in a self-portrait, this time in a black-and-white photograph which shows him wearing a sort of foolscap and lying on a sofa [Selfportrait (mit Mützchen), 1970]. The narrative of this exhibition begins on the ground floor of the Fondazione Brodbeck and culminates in the exhibition auditorium with a large, freestanding glass sculpture (Ex Voto XX, from Art Is The Better Life, 2010). In a sort of Constructivist ballet marked by tremendous fragility, this sculpture performs a stilted dance which, not only because of the brittleness of the material but also due to the tilting and stumbling form of the thin tubes of glass, conveys an impression of fragility and decay that is crowned in turn by the head of the artist blown in glass. This head dances upon the glass structure, with a peculiar strangeness, at once diaphanous and endangered. The glass display-case enclosing the work does not offer any protection; instead, it deepens the impression of fragility, which characterizes the entire structure. The casing scarcely has a supporting function but simply surrounds this fragile and bending figure. Complementing the translucence but also the hard intangibility of the whole is a black picture consisting of the superimposition of numerous photographs (Thousand or more images, from Art Is The Better Life, 2010), presenting a many-layered, computer-produced complexity, even infinity of information by means of carriers of visual data which have no mode of mutual dialogue and which cancel the inconceivability of the infinite message in a dynamically charged black hole that just barely allows us to recognize, at its upper edge, that it consists of many individual layers and all imaginable colors which, in their density, give rise to an indefinite nothingness. 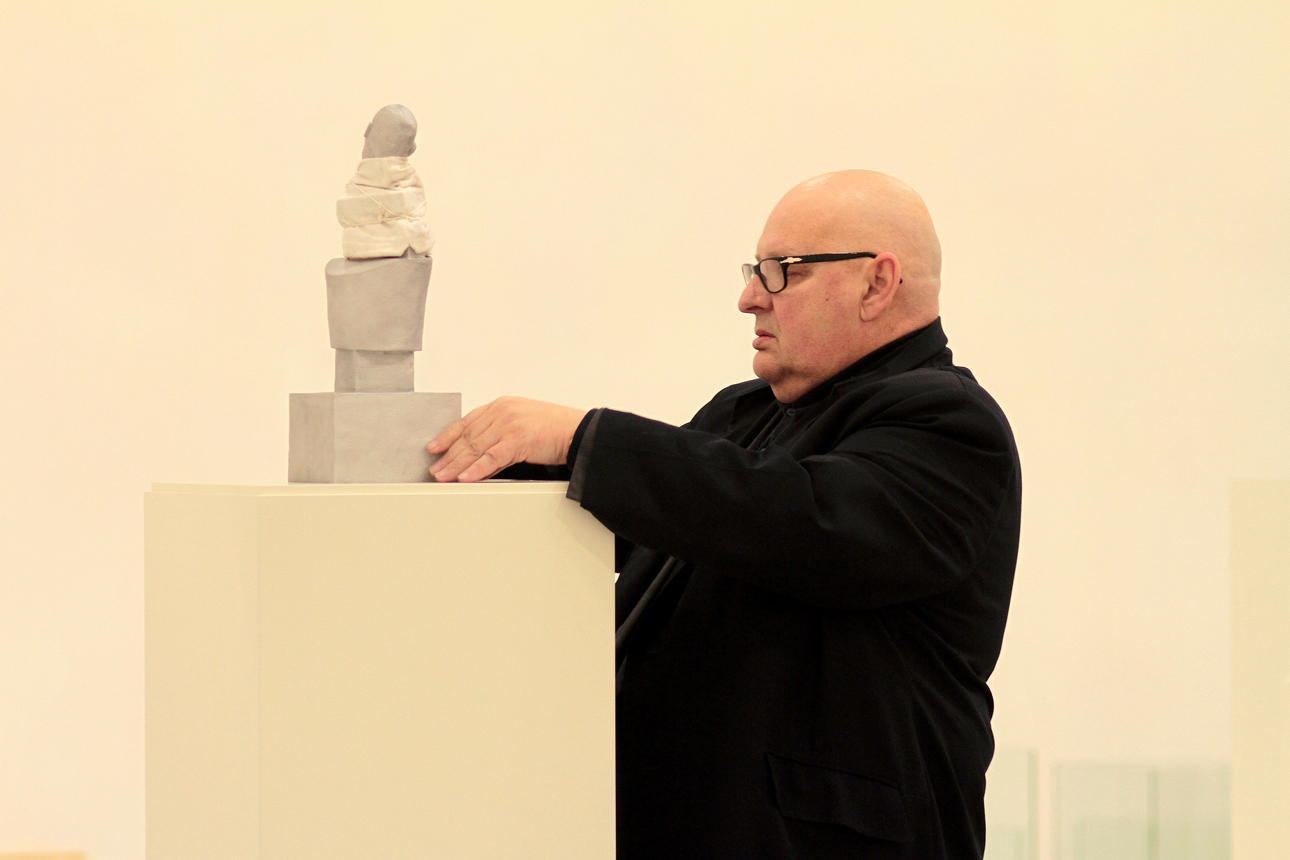 In addition, the foreground of the same exhibition space presents five sculptures as various emanations of the artist-small-formatted, unprepossessing, and reduced. This space, which is covered and secured in the white exhibition room, and to which is added a group of portraits from the series of the so-called Trademarks (from Placebos and Surrogates, 1970-1976/2001), is answered on the opposite side of the courtyard in the large, still-open hall by an arrangement of small-format sculptures. First there appear, in the series of four bronze sculptures with the title Spazio umano (“Human Space”, from Art Is The Better Life, 2007), figures whose bodies strive for extensions and in which additional arms and legs grow, the gaze is turned, and the gesture is altered into a circling movement. Corresponding to them are the five Prototypes (from Art Is The Better Life, 2009), small sculptures whose bodies are derived from different ethnic groups and from their various capacities of configuration, but each of which carries the portrait head of the artist.

Coming to light here is Urs Lüthi’s concept of plastic form which, borrowed closely from the history of sculptural form, focuses on various ethnic groups as well as on forms from art history, and thereby arrives at an utterly unique image of the artist and his identification with culture. 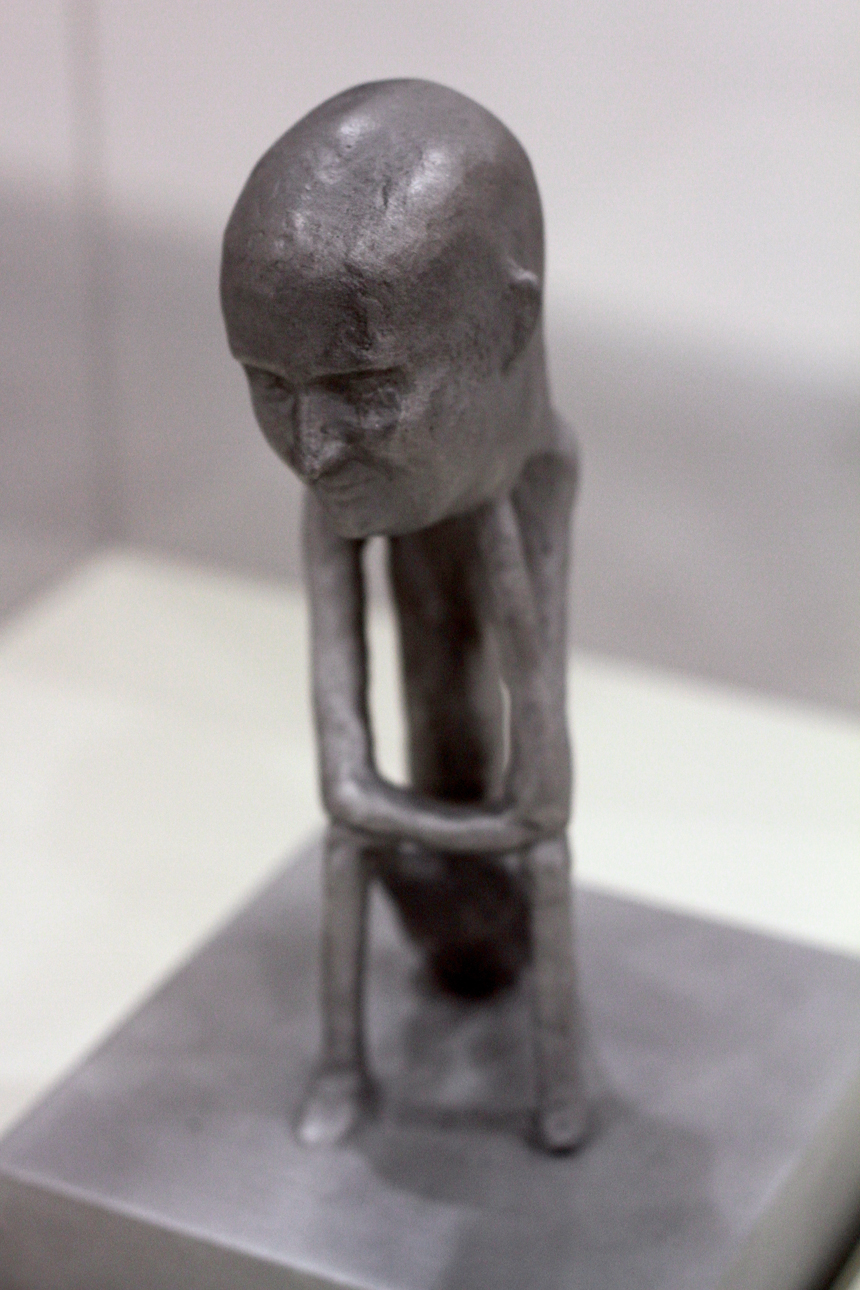